Urban development reduces the amount of green areas in cities. Green areas of different size play a vital role in the adaptation to climate change for example by reducing the risk of flooding, air pollution, and urban heat islands of built environments. Also, vegetation reserves carbon dioxide, and increases wellbeing in urban environments. The Green Area Factor mitigates the effects of construction by maintaining a sufficient level of green infrastructure while enhancing the quality of the remaining vegetation.

The user-friendly Helsinki Green Area Factor tool is used in the city’s land-use planning process. In the green factor method, the planner sets a green factor target level for the plot that can be achieved flexibly by the garden designer using various green elements, such as planted and maintained vegetation or various run-off water solutions, when designing the garden. The Green Area Factor is calculated as the ratio of the scored green area to lot area. In Helsinki, the method has been used on residential blocks, but it can be further developed for areas dedicated to trade, offices or business, services and industrial operations.

In iWater project the Helsinki Green Area Factor has been updated and storm water elements are given greater weight. In addition, the tool has been adopted and piloted in other partner cities: Riga, Jelgava, Tartu, Gävle, Söderhamn and Turku, and finally incorporated in the land-use planning process.

The updated Green Area Factor will be published in December. 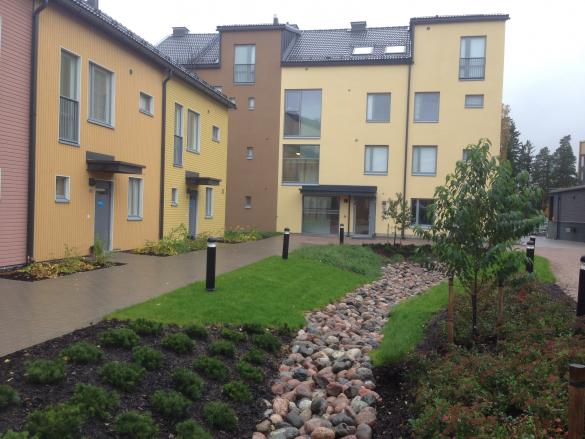