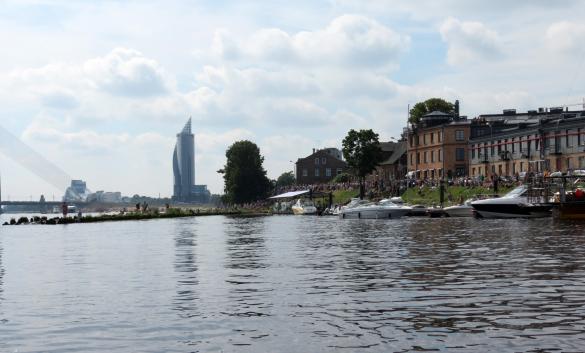 The neighbourhood of Torņakalns is located on the West bank of the Daugava River, in a walking distance from Old Riga and in a close proximity to the city centre. This neighbourhood is a blend of historical heritage and contemporary symbols of the city. In the Middle Ages it has been a part of the city fortifications, later it was transformed into allotment gardens. The neighbourhood holds evidence of old times in wooden and masonry buildings, some forgotten, but some well maintained, while tinplate roofs of wood storage sheds speak of more recent history of the city.

Despite its favourable location, currently the pilot site is a part of bigger deprived area of the city – as large areas of this neighbourhood are not built-up due to critically high groundwater levels and inappropriate water drainage systems, as well as due to hydro-geological conditions that are considered as adverse to construction works.
However, recent urban studies have identified a high development potential for this neighbourhood – a potential to become a new multi-functional centre of Riga and, at the same time, lively and green neighbourhood. Therefore, in the Riga Sustainable Development Strategy until 2030, high priority has been assigned to strengthening the social and economic potential of this territory while preserving its natural heritage. Although it is planned to develop a multi-modal national and regional scale transport hub in the pilot site, considering the role of landscape elements, public spaces, and elements of the city’s green structure in the whole neighbourhood area, the development concept of this area foresees that, apart from the infrastructure development, great importance should be granted for applying the most sustainable – energy efficient, nature- and resident-friendly urban development solutions.

In the future the focus area (further – GAF area) will consist of a combination of buildings, transport infrastructure and public spaces. A part of the Focus area has already been revitalized – i.e., the newly built Academic Centre for Natural Sciences (The University of Latvia), the first of the three faculty buildings in the complex, has been opened recently. As an integrated development project, the GAF area will feature different functions, including Academic Centre, housing, office buildings, recreational and shopping areas, transport services and infrastructure.

The pilot site is a part of the GAF area and currently it is an empty land plot, where in the near future a parking lot for up to 300 vehicles and an intercity bus terminal is planned to be developed. Future development plans of pilot site also apply to revitalization of green zones and improving their functionality by adding sustainable storm water retention and drainage functions that are based on green infrastructure solutions.

Functionally the pilot site is extensively used territory – a part of it is occupied by nature territories and former urban allotment gardens that are no longer in use, another part is an empty plot.

In the future much more intensive use of the whole GAF area, as well as the pilot site is planned. Detailed planning for this territory was elaborated in 2010 and it foresees that dominating land use will be a mixed centre building, combining public, business and services functions, as well as technical building and infrastructure.
In the pilot site the main future land use is technical building and infrastructure.

The terrain of the pilot site, similarly to vertical topography of the whole Riga city, is very flat – this site lies just between 1 – 2 m above sea level (ASL).
Quaternary layer is 20 – 30 m thick, formed by the layers of sand and organic-mineral mud.

Pilot site is located within the global Daugava river watershed, in the city watershed No. K – 33. Water is collected and drained to Daugava river through Kīleveina dich (see the Map of watersheds).

According to the Land use Plan for the city of Riga, the pilot site lies within the territory that has a status of the “Drainage Territory” (territory that should be drained up prior to building).

In the GAF area conventional storm water sewer system is set up. Direct runoff from land plots to sewers is ensured and storm waters are collected in two sewers of DN315 size and through Kīleveina dich drained to Daugava river.