iWater - Integrated Storm Water Management project (2015 – 2018) has been granted for the EU Strategy for the Baltic Sea Region´s HA Climate Flagship Status. The flagship status is a recognition for the iWater´s work for transnational cooperation within urban planning and integrated storm water management.

iWater project aims to improve the urban planning in the cities of the Baltic Sea Region (BSR) via developing integrated storm water management system. It brings together seven cities in the Central Baltic, the Aalto University from Helsinki and the leading network of the BSR cities – Union of the Baltic Cities (Sustainable Cities Commission).

─ iWater project is a good example of transnational cooperation aiming to increase resilience to the negative effects of climate change by increasing the capacity of local government to prevent damage to the infrastructure and economic losses in the cities caused by flashfloods. Integrated approaches and practical solutions elaborated by the iWater project partners could be successfully applied by other cities and benefit citizens of the whole BSR. By addressing common challenges and involving partners from the majority of the Baltic Sea Region countries, the iWater project fulfills well the criteria for flagship project of EUSBSR, stated Krista Kampus, Head of Baltic2030 Unit of CBSS, Coordinator of HA Climate.

To reach its goals, the iWater develops guidelines and tools for Integrated Storm Water Management and introduces the practices into urban planning process. Seven cities from the Central Baltic are involved in the project, but during the project’s time-life more cities are trained to use the integrated storm water management system and the Green Area Factor tool, which is one of the main outputs of the iWater.

─ The uniqueness of the iWater project is in the holistic approach, which addresses many challenges of urban sustainability and corresponding Sustainable Development Goals: storm water management, erosion prevention, air quality, local climate regulation, maintenance of genetic diversity, public health, etc.  By the end of its term, iWater would have accumulated a great amount of theoretical and practical expertise. This expertise and especially the connections between the urban planners from all the project cities should not be lost when the project ends. The tools and the lessons learned from the project should be spread through the whole BSR region and beyond, Krista Kampus continued. 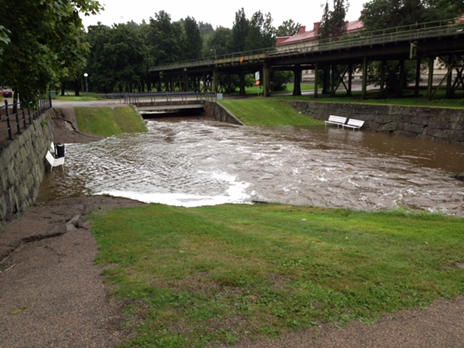